This 5mm thickness 50mm wide S355 steel sample is seen in test; lower half of page, "The Second fatigue test". The test was halted with the sample unbroken after 48330cycles of severe stress-cycling from 8MPa to 362MPa.

The sample in its original form as cut from the plate metal of the trial weld is see in close-up photos. The two fillet welds of the T-joint are not equal - the "learning curve" was still being experienced while making these welds. One has a very humped shape and steep toe-angle of about 90degrees to plate. The other has a much lower more desirable angle to the plate. However, this will be seen to be the one which started to fatigue crack - and was the one which failed in other fatigue tests to completion.

The technique of Magnetic Particle Inspection was used to inspect for fatigue cracks in the unbroken sample.

This sample is one of those shown in a page on the technique.

This is how the sample looked on MPI: 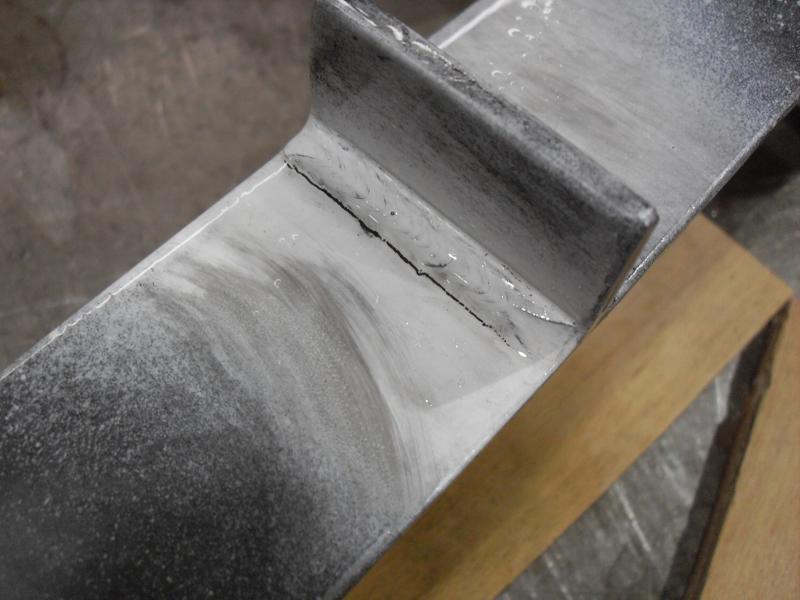 The pieces of the sample after sectioning are arbitrarily labeled 1, 2, 3, and 4 from the Left-Hand-Side (LHS) piece as seen

The faces inspected of pieces "2" and "3" are the LHS of the sections as seen.

Metallography of the fatigue-cracked sample cross-sections

The samples are seen as-polished but not etched and where subsequently etched.

Some features which can be seen:

A proven detection limit for the rough-and-ready MPI technique used of 0.5mm is gratifying.

However - cautionary note regarding form of this crack - it propagated at an unusually high stress. This will affect the form of the crack - which is expected to be less smooth than many fatigue cracks which unfortunately come to light when they cause an in-service component failure, for instance.

the "2" sample across the width

the "3" sample across the width